How much important is Possession Letter and Occupancy Certificate for Homebuyers? 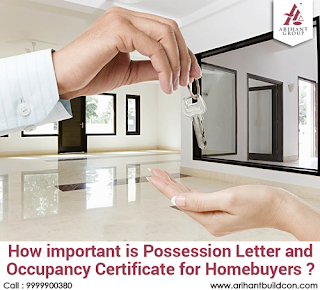 Many home-buyers, particularly first-timers are not aware of Occupancy Certificate (OC) and often mistake it to be the same as possession letter. There are several documents which are required during the purchase of a property and obtaining them could prove to be a tedious process. But occupancy certificate is a crucial document which must be sought and buyers have the right to take legal action against the developer if the same is not given to them.

As these certificates are not required while registering a property, the vast majority of the home buyers tend to disregard or ignore gathering these documents from their previous owners or developers of the apartment.

Occupancy Certificate is issued at the end of the construction by a local government agency or planning authority. The document is a proof of the building's compliance with applicable building codes and other laws. It indicates that the property is in a suitable condition for occupancy. The developer is in charge of acquiring occupancy certificate and is issued only once the building has been finished in all regards and is prepared to be possessed. A completion certificate is received by the builder from the metropolitan authorities upon completion of construction.

Acquiring Occupancy Certificate can be required under respective State laws. According to these state laws, one can't lawfully move into a building unless the builder or developer gets an Occupancy Certificate from the particular nearby authoritative or municipal bodies. The corporation or municipality can request that the property owners leave such unlawfully possessed flats or force overwhelming penalties for the sake of 'regularization'.

There are a huge number of apartments in urban areas like Bengaluru, Mumbai or Delhi which have been possessed with no Occupancy Certificates. In a large number of the cases, the building arrangements of these flats are affirmed however they don't get OCs due to not adhering to the approved building plan or because of different infringement.


As an informative buyer, you ought not act in flurry. While grasping handover of the property, ensure the developer furnishes you with every one of the documents. You have legitimate appropriate to get all the property related documents. So don't listen to any excuse given by the developer and immovably ask for possession letter, occupancy certificate, and other documents.
Posted by Unknown at 03:50